A HYDROGEN-fuel catamaran built by Cheetah Marine has demonstrated the potential of zero CO2 technology in the marine industry.

The 9.95m catamaran, designed and built at Cheetah’s workshops on the Isle of Wight features a Hydrogen Internal Combustion Engine (HICE). The Honda outboard works in the same way as traditional petrol engine except it burns hydrogen and produces harmless water vapour as the only emission.

The catamaran is the first marine example of HICE technology and has been tested throughout the spring, concluding with a 100km round the Island voyage in April.

Lucy Strevens, of Cheetah Marine, said: "We finished three hours ahead of schedule and still had enough hydrogen to circumnavigate again. It was a great success. Previously craft have been powered using hydrogen fuel cells, but it doesn't appear there's been a boat running on hydrogen in a traditional internal combustion engine."

The ‘Island Hydrogen’ project forms part of a government-funded project through Innovate UK which has also enabled the opening of a refuelling station near the M1 in Rotherham for hydrogen-powered vehicles.

Project partner ITM Power installed a marine refuelling station at Cheetah Marine's base in Ventnor, which produces hydrogen from mains water, assisted by a bank of 26 kW solar panels.

“Hydrogen is one of the cleanest energies available and represents the potential fuel of the future. It is exciting to be doing something that has never been done before."

Round The Island on Hydrogen Data

• Planned for 12 hour circumnavigation and completed in 8 hours

• Equivalent to 25 litres of petrol

Details about the project: 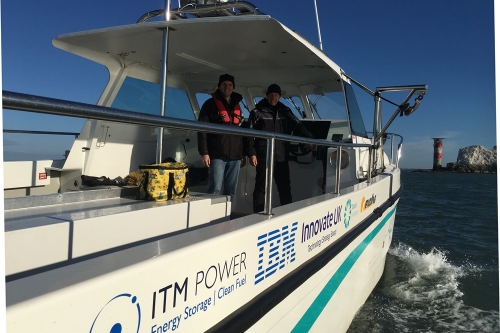