The Windermere Lake Patrol team received anew patrol boat last month when Cheetah Marine delivered a new Cheetah 6.9m long wheelhouse catamaran on a Cheetah built trailer. Windermere is England’s largest natural lake, 11 miles long with several towns and villages on it’s shores and marinas permanently berthing around 800 boats. A total of over 4000 boats are registered foruse on the Lake with launchings from the slipways reaching 200 per day during the summer.

As well as the many small motor and sailing boats there are water taxis and large cruise launches so the Patrol Team has a wide range of responsibilities. The Team attend some 200 incidents each year of various types ranging from fatalities to collisions and identifying vessels which are in a dangerous condition. Since2005 a speed limit of 10 knots has operated on the Lake, so much of the Cheetah’s time will be used in monitoring boat speeds.

Powered by twin 60hp Mariner engines, as are several of the Lake District National Park Authority boats, the Cheetah was built specifically for long periods of patrol work. The spacious long cabin houses both safety and monitoring equipment and if necessary an accident victim can be treated on the deck. Hydrive hydraulic steering was fitted and access made easy by the inclusion of a port side door.

Team leader Tim Maggs said “We are absolutely delighted with the new boat. It is perfect for the job. There is masses of room both in the cabin and on deck, amazing for a 23 foot boat. All the team love the stability and the really comfortable ride with no rattles or vibrations. The cabin is like a floating office, I can put a glass of water on the dash and it won’t spill. It has got great presence, looks the part,and that is so important when dealing with the public. Before 2005 there was no speed limit on Windermere so many people still expect to go as fast as they like”

Sean Strevens, Cheetah designer, enjoyed the build. “This is our first Cheetah to be used on a lake and as always, was designed specifically for the job in hand. Although the water conditions on Windermere are not as demanding as the open sea, with a strong wind whistling up eleven miles of water, stability was still an important issue. We worked well with the Patrol team within a very tight budget and it is good to know that the boat is a success” 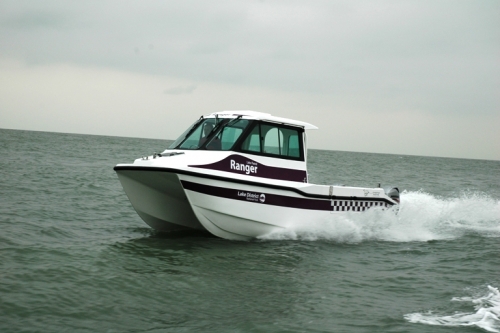