The 9.98m series of Cheetah Catamarans is specifically built to adhere to all the various governing body’s rules in construction and use of the under 10m fleet whilst having the capabilities of a boat much bigger. This is something that is crucial to keep Matt Overton’s fishing business ahead. With the fast, light hull, Sukat III is achieving 28 knots full speed and 19 knots cruising on 3700 r/min. Potting off the Skegness coast and heading out into the North Sea, the Cheetah copes easily giving Matt maximum days at sea. This is his fourth boat from Cheetah, getting bigger with each one. Matt started off with a 6.2m series, moving up to a 6.9m series, followed by a 8.9m series before getting his dream size of the 9.98m series. This is something, that now with over 25 years in the industry, Cheetah are seeing again and again from customers.

The vessel is fitted with a half width cab which gives a forward hauling position which is under cover. The large deck and high buoyancy of the 3.7m beam series gives Matt the ability to carry over 80 pots at once for moving gear. Strings of 40 pots are easily worked.

The boat is fitted with a 135hp Honda outboard and a 115hp Honda outboard. This is to fit his existing fishing licence and is a sensible move as these 2 engines are identical in most respects as they are based on the same engine block. Servicing is very easy as both engines have identical consumables.

Matt launches his boat off the beach; Cheetah’s strong and light design lends itself to this perfectly. Stainless steel keel bands give extra protection allowing Matt to run straight up stony and shingle beaches with peace of mind.

The move from the 8.9m series to the 9.98m series Matt says is for the extra buoyancy that comes with the wider beam and hulls. He is regularly fishing 30 miles into the North Sea and having the extra capability enables Matt peace of mind to push his boat that bit further.

Sukat III is currently achieving fuel economy 2 litres of petrol per mile for the boat. The key to this is the Cheetah’s fast and light design, something Matt is keen to keep in mind when adding equipment to the boat. As well as potting, netting is also something that Sukat III does from time to time. For this Matt has added a detachable net hauler so that when it is not being used the extra weight is not adding to the payload. The large practical space that the Cheetah gives means that versatility is one of the many benefits that gives users an advantage over competitors. 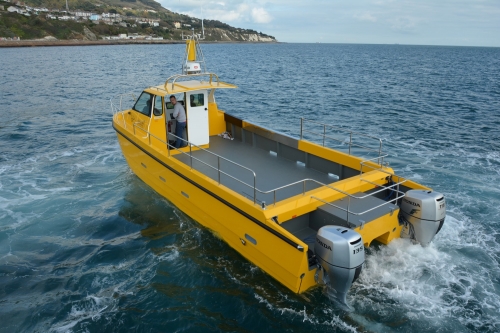