The Sharkman, the Cheetah & a giant tuna

Legendary shark fisherman Andrew Alsop landed a 500lb+ Bluefin tuna aboard his sharking Cheetah Whitewater yesterday. The fish is the largest fish to be landed in Welsh waters and after a two hour fight was promptly returned to the ocean. Whitewater had been chartered by commercial fisherman Gavin Davies who was on a busman’s holiday with some staff.

When Gavin’s team snagged something big they asked Andrew to take over. Andrew said: “It was a bit of a strange one. Gavin has chartered my boat before and he takes his boys from work every year. I don’t normally fish on these trips. It is unusual to get a tuna because they don’t normally take anything.They knew it was big and Gavin said I should take the rod and he would take the controls. I know how long it can take with tuna because I had a previous one that took five hours. This one was less at about two hours and 15 minutes. I had previously caught one that was 315lbs but that was with big heavy gear. We didn’t realise how big it was because of the tackle we were using until it broke the surface.”

Andrew added.’ I'd like to thank Gavin Davies and his boys for helping me beat the huge fish. Nothing better my own boat and my own designed rod. Amazing feeling battling a monster on such light tackle and winning. I'm hurting now.’

So a great story for Andy and Whitewater and the somewhat exhausted tuna who made a swift departure to the deep: 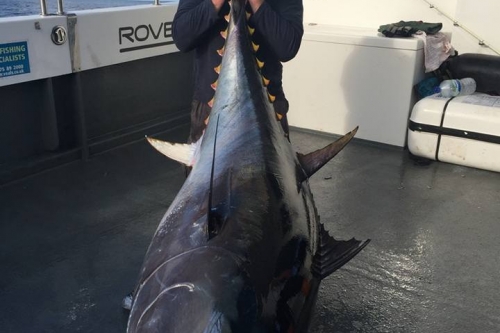