New Cheetah owner Roger Eves took collection of his new 7.9m Cheetah ‘Moonstone’ in late September. The 7.9m is built to an angling specification and attracted considerable interest at the PSP Southampton Boatshow earlier in the month. Roger reports the same at Suffolk Yacht Club following his voyage home.

'She has caused quite a stir in the marina since we arrived. She is a great boat and Cheetah Marine is a great company to buy from'

Roger chose the 7.9m Cheetah because he wanted a fast and safe fishing boat. He first started looking at catamarans in the States and then after hearing of Cheetah Catamarans alongside recommendations from other Cheetah Owners decided to visit the Cheetah workshops. Roger said 'The good build quality and personal touch swung the deal.'

In Cheetah's archetypal Golden Yellow. Moonstone is powered by twin Honda 115hp outboard engines. Like all motorboaters, keeping fuel consumption low is high on Roger's list and accurate figures are provided via an NMEA link system from the engines to the Simrad electronic package. The Simrad system includes plotter, radar and autopilot integrated with the Simrad Structure scan producing high definition 3d images of the seabed.

On completion of the 180 mile drive home Roger confirmed fuel figures at less than 1.5 litres per mile at cruising speeds averaging 18 to 21 knots.

Roger will be fishing up to 100 mile round trips in the North Sea from his base on the River Orwell. This includes wreck fishing and fishing the banks mid Channel.

Sean Strevens Cheetah designer said 'The 7.9m Cheetah is one of our most popular models. Since I first designed the 7.9m in 2003, they have been delivered all over the UK and Europe for survey, charter fishing and leisure purposes. The ability to road tow, makes it one of the most flexible small boats on the market' 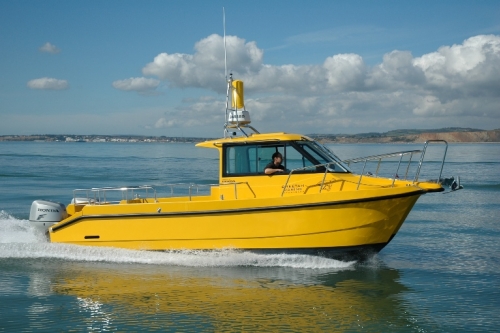