'Vivien B' and 'White Cheetah' are amongst the latest additions to Cheetah's Portfolio of 9.2m catamarans and will be on display at this years Southampton International Boat Show from the 13th to the 22nd September. Although both models are built for angling, the final specification is unique to each customers requirements, demonstrating Cheetahs one off approach to each build.

Back in 2010, Cheetah Marine launched a brand new series, the 9.2m Cheetah Catamaran as an addition to the already comprehensive range of power catamarans. Since then, the 9.2m Cheetah has become renowned in the powerboat world for its versatility in all manner of boating applications with advocates including sailing legend Geoff Holt who’s ‘Wetwheels’ has become a National icon for disabled boating.

‘Vivien B’ delivered to Essex in July is a bespoke private angling catamaran with a configuration which is also well suited as a charter boat. ‘Vivien B’ has a comprehensive fit out both inside the spacious wheelhouse and on deck. Creature comforts include a diesel heating system with hot water supplying the galley and port side shower. Accommodation features twin double berths and a galley with twin burner diesel hob, oven and a 12v refrigerator. The electronic package, mainly Simrad,includes an NSO processor, two 17” Neovo screens, one with the Olex system, 4kwdigital radar, GPS, DSC VHF, Auto pilot and Structure Scan with NMEA interface with engines and fuel tanks.‘Vivien B’ is powered by twin Suzuki 300hp giving speeds in excess of 40knots.

Launched just in time for the Southampton Boatshow,'White Cheetah' is a contrasting boat to 'Vivien B'. The boat has been designed and built for a professional angler based in Belgium and will be fished throughout the year in the North Sea. Twin 250hp Honda outboards and twin 250 litre fuel tanks give the boat a range of approximately 250 nautical miles with top speeds to be confirmed on sea trials early next week.

A further 9.2m, ‘Wetwheels Jersey’ is due to be launched later this week. ‘Wetwheels Jersey’ follows the success of Geoff Holt’s visit aboard the original Wetwheels to Jersey in 2012. Spearheading charity ‘LeTournoi’ have secured funds to acquire an identical Cheetah for Jersey which will commence service in St Helier in mid September. Full story to follow next week. 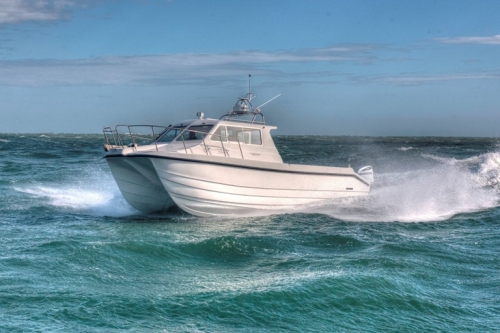