News from the Euro Front

The growing Cheetah contingent across Belgium and Holland has been driven solely by Cheetah Agent, Jan de Jonghe. The latest recruit is 10.2m ‘My Dream’ which Jan will be exhibiting at the Nieuwpoort Boatshow later this month. The 10.2m joins 10 other Cheetah catamarans currently moored in Nieuwpoort, one of the largest marinas in Europe. The show, from the 23rd – 25th October completes Cheetah Marine’s boatshow trilogy, exhibiting and demonstrating Cheetahs in three countries over the past 6 weeks.

Earlier this summer, René de Leeuw and crew aboard new 9.2m ‘Papilon’ enjoyed a smooth cruise to Roompot Marina in Holland. Unknowingly, Cheetah Agent Jan, had drawn the short straw and was to return from the Isle of Wight in René’s new RangeRover Sport.

THE RACE: The Crew eagerly awaited for 0.4m of water to float the boat in the Haven to get the engines running and beat a hasty retreat from Ventnor Haven at 7am. After crossing the Dover shipping lanes shortly after 11am René called Jan to report ‘Everything is going smooth, too smooth because the crew are bored. The boat is too comfortable’

Arriving at Roompot Lock in Holland, 5 hours later with a journey time of just under 9 hours, Jan was still stuck in a traffic jam in Belgium and arrived two hours later.

SPECIFICATION: The 9.2m features a 2.5m long wheelhouse. With a beam of 3.7m, the spacious deck features a central storage box for 12 LPG gas bottles. Inside there is a seating area for five with a drop down table to form a bed. An additional berth is forward of the dash in the starboard hull with a toilet in the port hull.

The 9.2m will be used for cruising and fishing in the Wadden Isles, a notoriously shallow yet rough part of the North Sea. Papilon has been fitted with twin 250hp Hondas which will be converted to run on LPG in Holland. 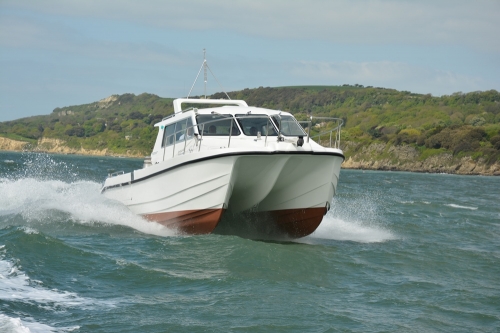