Cheetah Marine has developed a shallow water mini dredger specifically to combat the problem of seaweed deposition at Ventnor Haven on the Isle of Wight. The Cheetah Mini Dredge was launched in February and following a series of successful trials is undergoing the final stages of build to maximize its efficiency as a small suction dredger.

Sediment and seaweed at Ventnor Haven has been a serious problem since the Haven was constructed in 2003. Sand and seaweed are continuously carried into the haven in suspension especially during periods of rough weather. Once trapped within the Haven the seaweed breaks down anaerobically producing noxious fumes including hydrogen sulphide based compounds known to be dangerous to health. The sand accumulates within the entrance forming a sand bar which reduces the time frame that the Haven can be accessed for the local fishing fleet.

The Cheetah Mini Dredge is an open boat adapted from the 10.2m catamaran design. The bow features an aluminium A frame with track sliding which guides the pumphead vertically into the water column through Cheetah’s 1m2 moonpool. Unlike conventional dredgers the sliding nylon 5” pipes prevent the pumphead from straying horizontally as the boat is maneuvered.

Sean Strevens Cheetah Designer and Dredge Tester comments ‘The Minidredge is a very environmentally and people friendly solution to the problem of rotten seaweed at Ventnor. Initial trials have delivered very satisfactory results. We are aiming to clear the Haven of previous years weed so that we can tackle the 2012 influx in late spring as and when it arrives. This will avoid the ensuing decomposition and associated bad smells which have affected trade to the town and esplanade over previous years. Last year we cleared the Haven over a four week period using diggers and dumper trucks. By regularly operating the pump we should be able to keep on top of the problem and avoid any inevitable disruptions caused by heavy machinery operating along the Eastern Esplanade.’

The Powerpack and dredge pump is manufactured by Dragflow and consists of a 170hp 6 cylinder diesel hydraulic powerpack driving a Dragflow HY85 dredge pump with a maximum capacity of 200m 3 per hour. The total weight of the unit is 3 tonne with a combined weight of 6 tonne including the vessel. A Spencer Carter hydraulic cargo winch is mounted on the bow which lifts the pumphead from its extended position at 2m below the keels to the deck. The pump can be operated at any position from a minimum of 0.4m to 2m max draft.

Sea trials have proved most efficient at 1000 - 1200 rpm which pumps at a capacity of 150m 3 per hour and a 50% solid to water ratio. The pump is connected to a 6” heavy duty discharge pipe with bauer fittings. Discharge is directly over the haven southern rock arm. The material, already in solution is then dispersed by the tide.

'In three weeks of operation, the Haven is much deeper - a benefit for all haven users and it is also much clearer - a benefit for everyone. Already there are small shoals of fish in the shallows and the deeper parts of the haven has lost its black tinge as the seaweed has been removed' 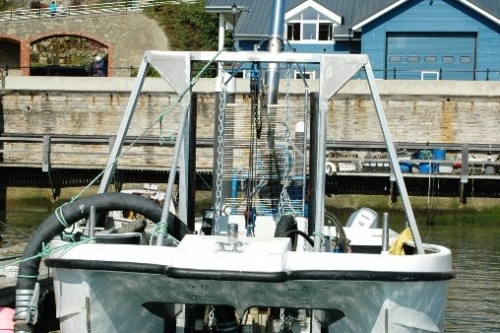