The first of the 7.2m series was built as patrol boat for the Environment Agency who will be exploiting the Cheetah’s extreme capabilities by working in severely fast flowing, shallow tidal estuaries.

The Environment Agency required a fast fisheries patrol vessel with the ability to deploy and retrieve nets from both the bow and stern. ‘Saila Vie’ also has to cope with surf over sand bars and fast tidal races.

The 7.2m, developed at the beginning of 2009 was built as a direct response to customer’s requirements for a fast, trailerable boat capable of carrying heavier loads and larger engines than the 6m series. The 7.2m also conforms to stricter road towing laws applicable on the Continent.

"We do alot of work in shallow, fast tidal estuaries. We can now confidently enter on rising tides and not worry if she grounds. When on the bed she sits true and you feel very safe, even with 10 – 12 knots of tide race. We were out in a force 7 last week, around the Gower Peninsular in 16ft waves. She coped beautifully and was very comfortable. To have this much confidence in a boat makes our job so much easier. A really well built boat."

The basic specification was governed by the Environment’s Agency’s pick up truck which could tow a maximum weight of 2.7tonnes. This all up weight also had to include the trailer. By integrating all of Cheetah Marines Knowledge from past projects, Sean was able to design a light weight vessel which can operate in challenging conditions. In conjunction with the catamaran and to complete the package, Cheetah Marine have also designed and built a twin axle aluminium disc braked trailer.

The bow features specially fabricated net bin frames on the bow designed to hold 2 x 70 litre bins. A removable moulded net shoot can be accommodated on the stern with fuel is storage beneath the shoot between the engines. With the whole set up weighing in at 2.5 tonnes, the Environment Agency are well within their legal limit of 2.7 tonnes.

"I designed the new 7.2m to meet the requirements of surveyors who required a fast, stable workboat suitable for road towing on the Continent where tow laws are more restrictive than in the UK. We have also developed a range of trailers built at our new workshops for the 6m, 7.2 and 7.9m series."

With a large deck and a spacious wheelhouse the 7.2m will become one of the most flexible and functional boats on the market. Orders have already been placed for a commercial fishing version to operate from Southern Ireland, a charter / pleasure cruiser from West Wales and a angling version based in Belgium. For commercial fishing applications the 7.2m can be shortened to measure in below the 7m limit for Seafish self certification. 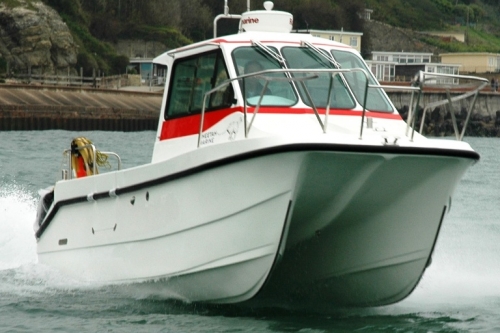