Following busy end of summer deliveries and three boatshows, Cheetah Marine are extending the season and heading south. A towable 6.2m is available for testing on the water with demonstrations of launch and recovery throughout the west coast of France, Spain and Portugal.

‘With Cheetah’s growing popularity in European countries like France and the Lowlands, it is feasible that the benefits of Cheetah’s efficient and economic hull will be appreciated on the Iberian Peninsular. The high lift bows and cushion effect through the tunnel will make an ideal hull in Atlantic swells.We decided the best way to raise awareness of our design was to go back to basics and show people. This is exactly what worked twenty years ago when I was fishing with my first Cheetah from the beach at Ventnor in very similar conditions to those experienced on the west coast of Europe.’

The 6.2m has already attracted significant interest at La Rochelle Boatshow and whilst stationed in CapBreton alongside the larger11.2m Charter Cheetah ‘XCat’.

Cheetah will continue to drive along the coast of the Iberian Peninsular launching and demonstrating the 6.2m Cheetah. She will then be stationed in Portugal over the winter.

Cheetah Marine are inviting interested parties to contact them on 00447974126378. It is also hoped that the presence of the branded Cheetah and trailer will encourage direct contact. 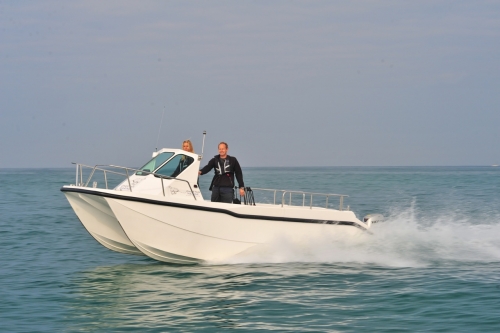