'A boat and a half!' was the verdict from Skipper Owston who took delivery of his second Cheetah in September. Another 10.2m has also been delivered to local skipper Rob Downer, who like Graham has upsized from an 8.5m Cheetah.

Cheetah Marine is seeing out 2010 with a flourish of orders for the latest 10.2m commercial wheelhouse model. The registered length of the 10.2 for commercial fishing is 9.97m with the added 200mm in the bow sprit. With curved panels, wider keel centres, and the well proven planning plank, this model is proving to be very fuel efficient, high weight carrying and excels in following and head seas as well as beam on. The 10.2m maintains the Cheetah tradition of space, stability and economy.

Skipper Graham Owston in Pembrokeshire, who took delivery of his 10.2m in September, traded in his Cheetah 8.5m to get the greater capacity of the new 10.2m.

It is a boat and a half. The stability, economy and ride quality are unbeatable. With a full load of pots on board the twin Honda 135hp engines give us 16 knots at 3200 rpm. We have had fuel consumption for the boat down to 1 litre per mile. Today, sea conditions were very rough and only Cheetah catamarans left the harbour. All the other boats stayed tied up. We hauled all our gear in real comfort. Cheetahs are the future.

All of the new 10.2m Cheetahs so far completed are powered by twin 135hp Honda engines, hydraulic steering is Hydrive supplied by Southern Cross and the winch gear is from Spencer Carter. All the stainless steel work was made in house. Cheetah Marine has six more orders for the 10.2m with the smaller boats also in demand. Local Skipper Rob Downer, who also used the 8.5m for a year before upsizing to the 10.2m comment:

'The stability is exceptional. With twin Honda 135hp engines I am using very little fuel. In one word, superb.'

Also recently delivered to Belgium is a 9m version of this model also with a 3.7m beam. Powered by twin 175 HP Hondas and designed with a long wheelhouse this model is for rod and line wreck fishing. This 9m has twin inbuilt 250 ltr fuel tanks and has a roller guide system for anchoring from the cockpit.

On the voyage to Nieuwpoort, Belgium, the 9m cruised the 165 miles at 22 knots at 3500 RPM and the boat only used 2 litres of fuel per mile. This Cheetah has a top speed of 35 Knots.

With over 200 sq ft of deck space to use, a choice of three wheelhouse sizes and an endless options list, the 10.2m can be tailored to a wide range of commercial fishing options. 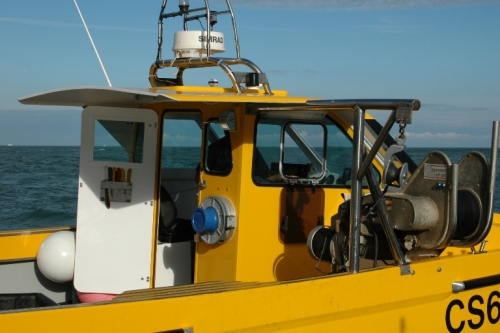