Known as Britain’s favourite on the water show, Cheetah Marine has had a growing presence for the past 13 years at the predominantly leisure show, although the company is proud of its strong commercial routes. Cheetah Designer and Founder Sean Strevens comments:

‘Historically, the Southampton Boatshow has been a very successful show for us. We meet a variety of potential customers and secure orders from both leisure boaters and commercial operators across the workboat sector. The show also attracts a growing number of international attendees. In just the past year we have delivered Cheetah Catamarans to Canada,Ukraine, Portugal, Belgium, Holland, France and Ireland.’ ’

For the last decade, serious leisure boaters have taken advantage of the commercially proven hull design with a variety of leisure designs and finishes. This year Cheetah Marine are sponsored by Honda and Simrad and will have the following boats on display

ON THE HONDA PONTOON

‘After seeing many powered catamarans whilst travelling in New Zealand, we started to look around the UK for a catamaran to replace our cabin RIB. Much to our surprise we found Cheetah Marine at Ventnor on the Isle of Wight. Cheetah Marine’s capability to tailor their craft meant that our exact requirements were met. As well as being used as a day boat for entertaining friends and family we required long-range cruising capabilities.’

Returning to our Island roots, one lucky man received a new7.2m Cheetah Catamaran for his birthday this summer. Unbeknown to Siggi, his wife Margaret organised delivery of their new 7.2m Cheetah to their home harbour of Yarmouth for Siggi’s 75th. The couple were impressed by comfort and stability of Cheetah’s demonstrator and decided to enjoy retirement fishing and boating off of the Isle of Wight.

After talking through the project with Cheetah designer Sean Strevens, they selected the Cheetah 7.2m with a spacious and well equipped wheelhouse. “Catfish” is powered by a pair of the new Honda 80hp engines which now have replaced the popular Honda 90hp engines.

Powered by twin 115 Honda outboard, 9m ‘Lazy Dayz’ is due for launch at the beginning of September. The Cheetah features and offset wheelhouse and is set up for commercial charter and will be operated from Beaulieu in the Solent.

Cheetah’s 9.95m Charter Catamaran has been fitted with the latest in electronics by Simrad who are using the catamaran as a demonstrator throughout the show. ‘Cheetah 2’ will be running demonstrations in Southampton Water on the hour to display Simrad’s new forward facing echosounder which is connected to twin 19” touchscreens and associated Simrad electronics.

If you have any questions about the show of any of the Cheetahs on display, please do not hesitate to call us on 01983 852398. 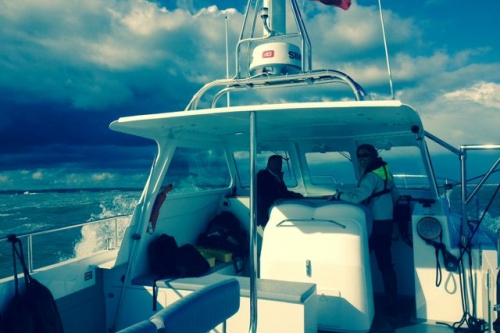