Alex is one of 15 fishermen who fish and camp the 75 day season from AnticostiIsland in Canada’s Gulf of St Lawrence. Following delivery of his new 9mCheetah Alex has reported his best ever season, landing 36 000kg of americanlobster.

Alex first contacted Cheetah Marine through the facebook site, popularwith Cheetah owners and enthusiasts. Alex required a boat which would replacehis existing monohull and would fit the following criteria.

‘I fish 300 traps a day throughout a 75 day season along AnticostiIsland. There is no wharf and we need to hide behind natural reefs or go intorivers at high tide to find a safe place during storms. This is why I need ashallow draft and a light weight design. The hull must be strong as we have tobeach often to unload bait and groceries which are delivered weekly from asupply boat after a 12 hour trip across the Gulf.’

Alex viewed an existing survey Cheetah which had been recentlydelivered to Quebec and made plans to visit the UK. Following a visit to theCheetah workshop in 2013 Alex ordered from Cheetah Marine’s 9.95m x 3.6mseries. The Stage B specification included a reduced length at 9.2m LOA, anoffset wheelhouse and keel bands.

Le Poisson Clown arrived in Halifax in February. Alex’s next task wasto complete the fit out in subzero temperatures in a polytunnel near his home.With daytime temperatures regularly dropping below -10 and the start of the2014 season looming this was quite an accomplishment!

Cheetah’s regular correspondence with Alex regarding the final stagesof completion went quiet in early May when Alex launched Le Poisson Clown andcommenced the 150km journey across the Gulf of St Lawrence to Anticosti. Onreturn in late July, Alex sent the following photos and comments:

‘I am back from my fishing season,it has been my best one ever with 36 000 kg of lobster!!

Obviously the new boat helped a lot, here's how:

The first impressive characteristic was obviously the incrediblestability with no pounding at great speeds. The side door cabin configurationadded unmatched manoeuvrability and very intelligent access to the steering,throttle and electronic during fishing. The trailer system allowed veryeasy launchings and retrieval even at low tide. The boat is very easy tomanoeuvre by hand when close to the beach and draws little water. She wentaground and on rocks at low tide with no damage or little due to the keelbands.

The high quality materials used throughout the building process andattention to details coupled with the Cheetah team experience and availabilitymade that project a great success. I am very happy with the boat and wouldrecommend Cheetah to all lobstermen!’

Alex reports good speeds and fuel data withtwin Honda vtech outboards and 15” propellers. Top speeds was 31.5 knots. Fuelconsumption at 18-20 knots at 4000rpm with roughly 1000kg aboard was just under2 litres per mile. The heaviest load carried was 4000kg on deck. 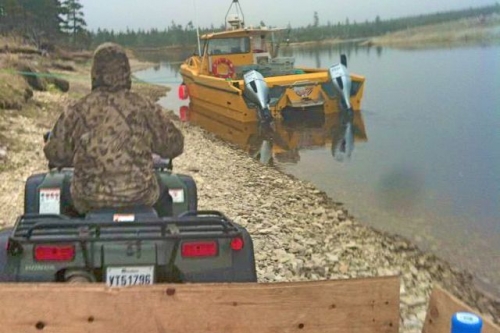