Cheetah Marine has invested in an ongoing Research and Development programme to produce plugs and moulds for the evolving Cheetah series.

The original 6.2m and 9.95m Cheetahs were worked hard and tested on Ventnor surf beach by Sean Strevens and Geoff Blake throughout the 90s. The design brief when these original Cheetahs were built was critical in producing the Cheetah success story.

‘The catamarans I designed needed to be as light as possible as we had to push them back down the beach by hand. They had to be very strong to withstand beaching in heavy surf and speeds up to 25 knots. They could not broach in the swell and windage had to be kept to a minimum, otherwise the bow would blow round when launching.’ Sean Strevens

Today, Cheetah Marine continues to invest in an ongoing development programme to ensure the Cheetah range is as economical, safe and efficient as practically possible. As applications diversify, new moulds are produced to suit, allowing even further choice for new customers.

As European Leaders in small catamaran design, Cheetah Marine is committed to the development of inshore boat design and is involved with several part funded projects through the Technology Strategy Board.

The potential of using alternative green energy to power the Cheetah’s efficient hull design is a natural progression of development. Alongside engineers from ITM, specialists in the development of hydrogen as a renewable fuel, Cheetah Marine have designed and built a catamaran for ITM to test and optimize existing petrol outboards to run on hydrogen. The Cheetah is the first marine example where Hydrogen Internal Combustion Engine technology is used. The hydrogen Cheetah will be tested in validation trials throughout 2015-16. With a refueller now installed at Cheetah’s seafront workshop, the ultimate goal is to produce hydrogen with excess energy from the workshop’s PV panels to power the boat.

Cheetah Marine represents the boat building expertise within the HEWV Project which stands for highly efficient work vessel. Including Cheetah Marine the collaboration is formed of three partners, Cox Powertrain leaders in diesel engine technology and Academic Partners at the Ship Science Department, University of Southampton. The project includes the development of an optimized hull to suit the weight, power and torque of the new Cox diesel engine. Project packages also include the containerisation of the 10m hull, enabling it to be easily and economically transported to customers around the world. Investigations with Southampton University looked at increasing hull efficiency with hydrofoils. The results showed no significant improvement as the hulls were already extremely efficient. CFD analysis validated the hull form, demonstrating minimum hull resistance at all speeds and conditions.

The Drop Test - a favourite amongst Cheetah followers

Back in 2002 a swamp test was carried out to determine what would happen if a significant amount of water was taken onboard the deck of a 6.9m.

1.Using weights to simulate engines and an additional 300kgs of load, a crane rig was set up above the Cheetah. 4500 litres of water was contained one and a half metres above deck in a high capacity Seaflex lifting bag.

2. With a quick release mechanism, the 4.5 tonnes of water was dropped instantaneously onto the deck. The volume of water filled the cockpit, forcing the hull down into the water. This downward thrust was immediately exceeded as the upward motion of flotation within the sealed buoyancy tanks forced the hulls back to their natural buoyant position.

3. The vessel remained stable under full flood whilst the water drained from the two aft scuppers. Complete draining time was 2 minutes, 20 seconds. Thorough examination of the vessel following the impact proved there was no internal or external structural damage.

The drop test became legendary amongst existing Cheetah owners and undoubtedly sold many Cheetahs in the years that followed. The test demonstrated the strength and robustness of Cheetah Marine's advanced construction materials. Strength was appreciated further by onlookers taking videos and photos as Cheetahs surfed up the UK's beaches in big following seas. 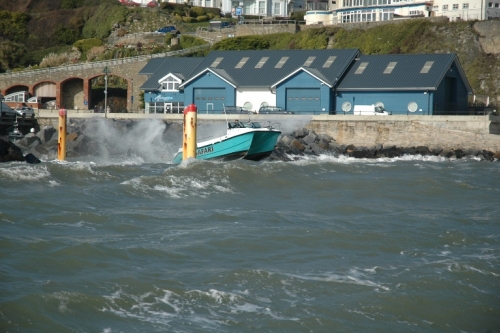