The latest 10.2m Cheetah is the first catamaran in Europe to feature two of Yamaha’s new XTO 425hp outboards. ‘FriendShip’ travelled from Cheetah’s Isle of Wight base to Nieuwpoort, Belgium in December last year and will be used for fishing trips in the Channel and North Sea.

FriendShip has been built for Steve Rosseau. As a boat owner for 10 years and a fishermen since school days, Steve defines fishing as the ultimate way to spend quality time and has a species list to match his enthusiasm.

Steve comments: ‘There are a lot of Cheetahs in the port of Nieuwpoort. My previous boat was open which was very cold in winters especially as we like to fish offshore. A friend on our pier told me to buy a Cheetah. Once I looked at all the information and tried a Cheetah I was convinced this should be my next boat. Quality, comfort and space combined with speed – a match made in heaven.’

Friendship is the first catamaran in Europe to feature Yamaha’s tremendous new XTO 425hp outboard and is the most powerful Cheetah built to date.

Sean Strevens, Cheetah’s Founder and Designer comments on the role of outboards in the development of Cheetah’s designs.

“We’ve always built and developed our hulls so they can accommodate emerging outboards as the manufacturers battle it out to produce larger and even more powerful units.

Yamaha’s investment into the new XTO has been extensive which is shown in the build quality and design features of the new 5.6 litre model.

Outboards are now accepted on vessels up to 15m without hesitation. When I first drew up our 9m x 3.6m fitted with outboards in 1996 it received a rather sceptical audience because of the outboard engines. Now outboards are fully accepted as being the best propulsion solution for our catamarans. Our new 11.5m which is currently in the plug building phase will be powered by a range of outboards including the Yamaha XTO, COX diesel, Mercury’s new 600hp as well as smaller units down to the Honda’s BF135 and Selva’s 100hp Sei and Killer Whale”

Round trips of 100 miles or so will be no challenge with Friendship’s top speeds of 48 knots. Cruise speeds of 25 knots are achieved at just 3000 RPM using 65 litres per hour or 2.6 litres per mile during sea trials. Sean comments ‘On a vessel of this size and power, this fuel economy at 25 knots is very good.’

Friendship left the Cheetah workshops as a fully completed boat ready to sail home. On arrival in Belgium, a detailed electronics package was fitted and customised by Paul De Lange of Marine Electronics, a Simrad expert from Nieuwpoort.

The 2.6m wheelhouse designed with long transits between fishing sites in mind features a raised workspace with spacious seating for 5. Forward of the dash is a marine toilet in the port hull and berth / storage in the starboard hull. A central hatch enables easy access to another forward compartment specifically for rod storage.

Outside, is dedicated to fishing with a large spacious deck, easy side door access and storage boxes which doubles up as seating.

Cheetah Catamarans started turning heads in Nieuwpoort back in 2009. Since then, the seaport and surrounding area has become a Cheetah hotspot as the benefits of Cheetah Marine’s twin hulled configuration both under power and at anchor were admired by fellow fishermen and practical boat owners.

As more heads were turned more orders were placed and now there is a considerable fleet of Cheetah’s in Nieuwpoort Marina.

Cheetah’s first boat was built by Sean Strevens in the late 80s and was designed to fish the rough waters off the south coast of the Isle of Wight.

To handle these conditions the catamaran’s feature a hand layup with a composite multiaxial Formax and strong honeycomb decks and bulkheads. Construction features include sealed underdeck compartments with the deck bonded direct to the wide lateral bulkheads. This stiff construction is combined with the hull shape that produces lift in a following sea and a tunnel cushion effect which guarantees a soft ride into head seas.

The resultant low centre of gravity, light yet solid vessel has now been tested in harsh sea conditions around the world for over 30 years.

Cheetah Marine has a good line up for 2021 with progress well underway given the current climate. Orders span all sectors and include a Police Boat for Scotland, Wetwheels 7 for disability boating and many returning commercial fishing owners. The new 11.5m x 4.3m series will be launched later this year. 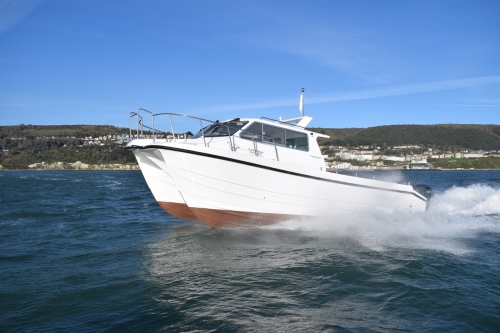