8.5m ‘Gusto’ will enable Davies brothers to get to sea more often

Another Cheetah catamaran joins growing Cheetah fleet fishing from South Wales. Skipper Lee Davies, in Partnership with his three brothers will be working ‘Gusto’ from a tidal harbour on the south west coast. The new Cheetah will enable them to get to sea more often, taking advantage of the Cheetah’s rough weather capability and incredible stability.

“Gusto” is an 8.5m Cheetah, extended to 8.9m LOA. This provides a useable and generous deck area of 5.6m x 2.8m wide. Designed as the perfect potting machine, twin Honda 90hp engines supply plenty of power both to achieve a top speed of 26 knots and power all the necessary electronics. Full hydraulic steering is by the well tried and tested Hydrive from Southern Cross Marine.

Cheetah Catamarans have become increasingly popular in South Wales. I originally designed my first Cheetah to work from a beach and this is how many of the guys in South Wales operate. The Cheetah design also lends itself extremely well to working from tidal harbours. Drawing less than 30cm gives a greater time frame from which fishermen can operate, catching the best fishing when the tides are fastest. In the harbor she will sit level on the bottom and will happily work close in around rocks and over sand bars

Four x 40 litre fuel tanks will give the twin Honda 90hp outboards 12 to 15 hours range. Hauling pots is powered by a Spencer Carter Hauler with a 13hp Honda engine. A stainless steel davit, three pot shooting posts, potting rails and potting table were all custom built in the Cheetah metal workshop. The inbuilt stern shoot incorporates the box which houses the hauler engine.

With a beam of 3m and wide hulls with 1.9m centres, buoyancy is substantial allowing heavy loads to be carried in complete safety. In corners, the 8.5m will stick to the sea like a train to the track, turning extremely level without centrifugal pull to any side. Like all Cheetahs, the 8.5m has been designed with rough seas in mind. The hulls are deep V throughout ideal for cutting through short sharp chop with added buoyancy forward enabling the Cheetah to retain its course in following seas.

As with all Cheetahs, safety is a high priority. Beneath the self draining deck the two hulls are separated into watertight, gelcoated compartments.

we had high expectations which Gusto has surpassed 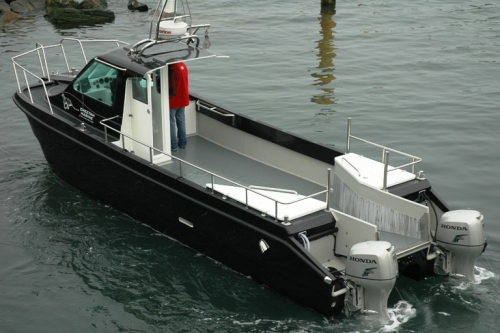